I didn’t have time to write as much as I wanted. Since I am a developer I went to listen to the different sessions and loads of different media was there too. But here are some thoughts and a couple of pictures of some of the things I did last week. Read the full article to see the pictures.

Accessory development kit 2012 was a really interesting talk. And the coolest thing was that we all got one. A cool little speaker, neat LEDs for a clock and even a couple of party LEDs and capactive buttons. You can read more about it at developer site. One of the best thing about it is that the body is screwless! The chassi is connected with magnets. Making it extremely easy to open but still strong enough to be moved about without the chassi opening itself.

The ADK has several modes to be set in. It can be used as an alarm clock, stream music to it through bluetooth or set the display to tell you which color the color sensor senses.

ADK and Nexus 7 with . For more ADK pictures scroll down.

I went to was the Pitch nite with GDGsf courtesy of Google. After a night of different pitches we were an awesome team combining our strengths into producing an awesome presentation for Teen Lockthe pitching competition was judged by several big fishes in the startup and also Silicon Valley industry. Our team won! The complete pitches are available 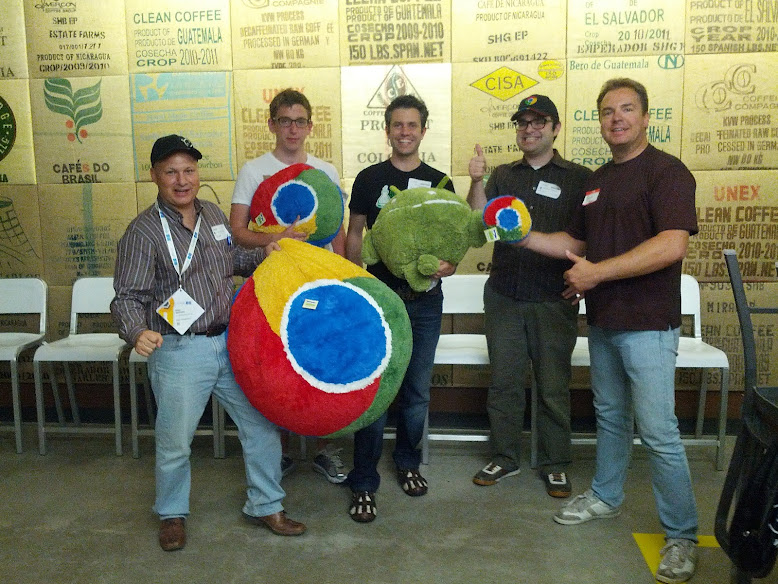 Teen lock with the squishable prices![/caption]

Jelly Bean the different talks about the performance gains by Chet and Romain was extremely interesting. Mocking the different rumours about version numbers out in the internet was hilarious and met with laughter. What’s new in Android and For butter or worse are two interesting sessions about these topics.

The complete third day consisted of different design sessions. One example was design for engineers. Hopefully that can help for better looking design. I just hope that more developers start using higher target SDK-versions so we can skip the old 1.6 looking apps. Android design for success, So You’ve Read the Design Guide; Now What?, Navigation in Android _No pictures were taken during day 3. :( _ All the different sessions are available at https://developers.google.com/events/io/sessions

ADK and Nexus 7 with the app